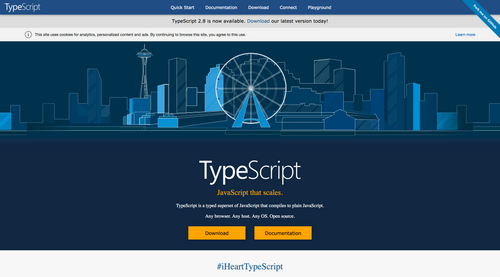 Learning some TypeScript has been on my to do list for sometime. I finally found some time and started by reading the docs to get familiar with it. The next step to really help learn it was to actually use it for a project so I decided to convert an existing React app to use TypeScript. This blogpost is a guide on how I did exactly that.

First up: Wow, developing with TypeScript is amazing. Most definitely #iHeartTypeScript !

And now let’s get started.

To make things simpler I used create-react-app with TypeScript flags in order to scaffold a React app with a TypeScript config. My thought process was I could this config in my existing React app and it abstracts away the whole Webpack configuration (another thing on my learning list by the way).

This is the command to run to get a TypeScript React app:

Now I had a TypeScript config, I used this in my existing React app as a first step to converting it.

First up I created a new git branch git checkout -b convert-to-TypeScriptfor my work. Now I could replace the React app config with the TypeScript config, and work through the errors until the app compiles:

And add a .prettierrc file so Prettier formatting is aligned to TypeScript linting.

And for complete sanity, I deleted the node modules then installed all dependencies again with yarn install to make sure everything is installed as it should be.

Get the app to compile

With the config in place, it was time to try running the app and see what happened i.e. what errors I would get.

So yarn start and let the fun begin.

This was two different errors. The second about the “required file” was a simple fix. TypeScript was looking for a TypeScript file as an entry point i.e. file index.tsx. I changed the existing entry point index.js to index.tsx.

For the other error, it seems the config I copied over was not quite right so I added the missing baseurl in compiler options in tsconfig.json like this:

This was a common issue across multiple files. The fix was straightforward in terms of syntax:

Now the harder part. Why was this an issue for TypeScript? And how did the fix work?

After some research, here’s what I learned. The React package (and many other packages) don’t actually have a default export. Instead they have named exports. So why doesn’t this work with TypeScript? Basically it’s a difference between how Babel and TypeScript handle this. Babel is used by create-react-app to compile the JavaScript and it creates a synthetic default export from all of the named exports, whereas TypeScript doesn’t follow this approach.

So in TypeScript you need to import everything and then use the named export when required. For example, to use the React Component named export you would do this:

OK, good progress made because the app compiled but other than the config and the entry point index.tsx there was no TypeScript in sight. Next step then was to convert the next JavaScript file to a TypeScript file and after the entry point, the first component is App.js.

I changed the filename App.js to App.tsx, restarted my development server (yarn start) and started working on fixing the type errors.

A side note, as part of my development process, in tsconfig.json I sometimes toggled the setting "noImplicitAny": false, between true and false. This was to allow/disallow any types in order to check what needs type checking versus getting the App to compile. The aim is to have this set to true for complete type checking but it’s sometimes useful to have the app compile and check how things are working before going back to check any types.

The first type error was the books array on my state object:

To fix this I added an interface to set the contract for state should look like. I set both the books and shelves array as optional i.e. ? denotes optional. The reason for making this optional is the initial state is empty until the component has mounted, i.e. the API returns data.

In addition, I created an interface for the book object:

The next compile error was this:

The <Route /> component takes prop exact to match an exact url path. Before the return statement, I declared exact as a constant and set the type to a bool like this: const exact: boolean = true; and then as before pass in exact={exact} to the component.

The next error related to my method to update books and the args passed into it. Here’s the error and how I fixed it:

App.tsx fully converted to TypeScript! A small celebration and then I continued converting other files to TypeScript.

Converting a .js to a .ts file

Next up I took on a straight JavaScript to TypeScript conversion with no JSX. Converting this file involved stating the types for the args to each of the functions. I also re-used the BookObject interface:

String or array of string types?

This demonstrates the usefulness of TypeScript.

The compile error was this:

OK, easy I thought and added a string type. Wrong! But the error messages are so helpful!

So of course it’s not a string, it’s an array of string types. I corrected the code like this:

Parameter ‘e’ implicitly has an ‘any’ type.

And then two other interfaces to manage the props in the component. The first for what is passed into to the component, and the second for managing props which are passed back up to update a book when moving it between bookshelves.

This was an interesting compile error. This was the first Class I was dealing with and so it was a little different from some of the other stuff I’d looked at.

The TypeScript compile error was this:

After a bit of searching and docs reading I found a few things that helped to solve the issue.

First up, from the TypeScript docs re generics and generic classes:

A generic class has a similar shape to a generic interface. Generic classes have a generic type parameter list in angle brackets (<>) following the name of the class.

Next, a React class requires a generic class in the form of <props, state>. Within each of these generic classes, you state the types. In the end I used interfaces for props and state which I added next to the class like this React.Component<SearchPageProps, SearchPageState>

The full example is here:

This resolved the type compile errors.

This one puzzled me for a few hours late one evening. In the end, I shut down my laptop and went to bed. In the morning, a possible solution came to me whilst I was having breakfast.

Key lesson here: don’t code when tired, take a break and get plenty of good sleep.

So the error that caused me so many problems was this:

It’s on a node module react-debounce-input used as part of the search functionality. Here is the code as used in the SearchPage.tsx component.

The solution was to add to this line readonly placeholder?: string | number; in this file node_modules/react-debounce-input/src/index.d.ts:

This fixed the TypeScript compile error because previously TypeScript was looking for the property placeholder on the object and couldn’t find it.

Having fixed it in the dependency, I wasn’t then sure how to keep my changes. I found a good answer on Stack Overflow:

I decided to try out option 1 first and see what happened. I opened a PR to the repo… and it was quickly accepted and merged. 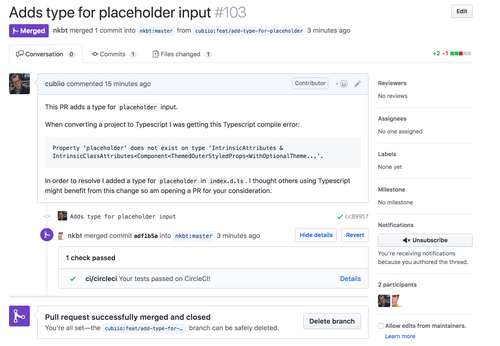 By the way, that was my first code contribution to an open source project. 🏆

As part of my development process, I wanted to use console.log() but this causes TypeScript to fail to compile due to a TSLint error. Rather than change the config and then potentially make git commits with console logs still in the code, I opted for this instead to temporarily disable TSLint:

Finally, some thoughts on using VS Code with TypeScript.

One recommended config change is to set this setting to true in your user settings:

This means you’ll see the number of implementation of your interfaces in your code e.g. 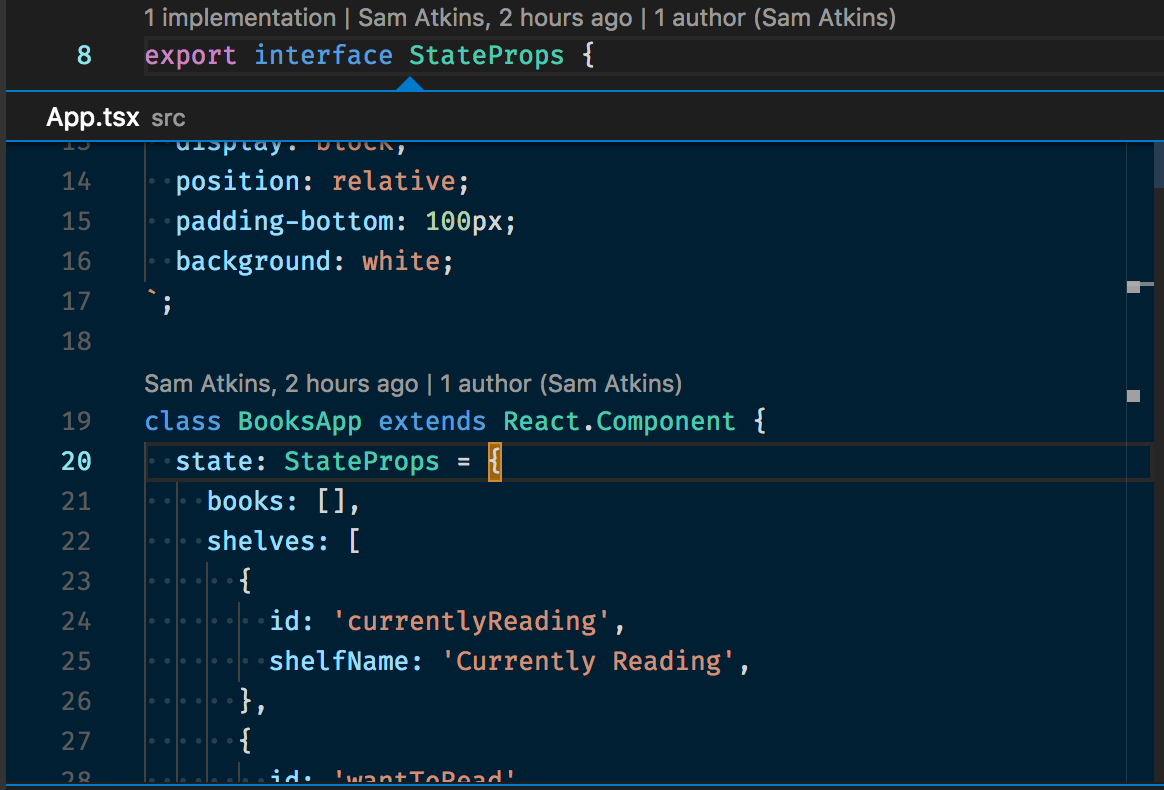 TypeScript and VS Code really play well together, as you would expect, I mean VS Code is written in TypeScript. VS Code becomes even more IDE like and it’s really productive to work with TypeScript in VS Code. I’m a huge fan of both.

To conclude, using TypeScript is a fantastic development experience and it achieves this by:

It was good fun converting my React app to using TypeScript. When I find time I will convert some other React apps to use TypeScript.

Next up, convincing the team at work to use TypeScript! 😏